ONE-STOP RESOURCES FOR VOLUNTEER ATTORNEYS!
The purpose of this website is to expand access to justice by facilitating the sharing of information and resources among legal advocates and by promoting pro bono representation by members of the private bar. If you are a pro bono attorney or legal services staff advising low-income and vulnerable clients, here are resources to help you. For training materials, sign up for a free membership.  For current pro bono case listings, click on ProBonoOregon below.

Fundraising efforts for legal services programs in Oregon are coordinated by The Campaign for Equal justice (CEJ), an Oregon non-profit organization.

Click here for info about Pro Bono Projects throughout Oregon!

Prior to the COVID-19 pandemic, Oregon was in the midst of a housing crisis due to a shortage of affordable housing. In eviction cases the vast majority of landlords were represented by an attorney or agent while very few tenants have any representation. While legal aid represents thousands of tenants a year, demand for assistance exceeds our limited resources. With the expiration of the statewide moratorium quickly approaching demand for housing legal assistance is expected to drastically increase. Your help is needed to preserve stable housing for members of our community.

Through the clinic, Oregon pro bono attorneys provide critical legal assistance to low-income tenants. Attorneys review rental termination notices, advise tenants on the validity of the notice and notice defenses, draft demand letters and negotiate settlements. Trainings and materials are available. This is a virtual volunteer opportunity. For more information or to volunteer, please contact Jill Mallery at jill.mallery@lasoregon.org. 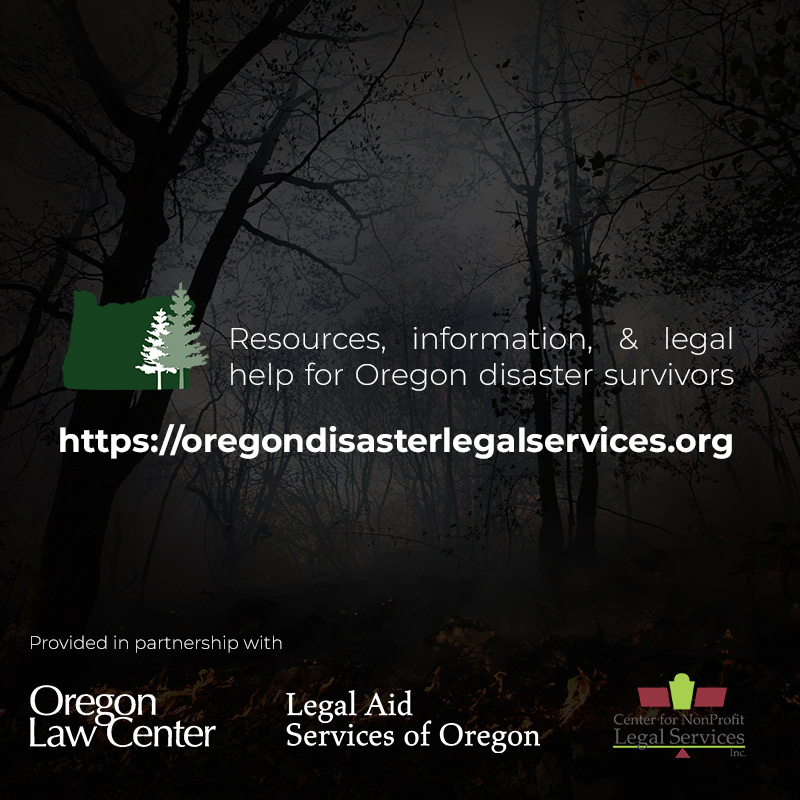 What is Legal Aid?

Civil legal aid ensures fairness in the justice system. It provides essential services to low-income and vulnerable Oregonians who are faced with legal emergencies.

When low-income Oregonians lack the resources for needed legal help, they are effectively shut out of the justice system. To the average person, our legal system is a maze. That’s why lawyers are trained to guide their clients through the system.

OregonAdvocates.org is a project of the LASO/OLC Pro Bono Committee, The Lawyers' Campaign for Equal Justice, and the Association of Oregon Legal Services programs:

A non-profit advocacy agency and a faith-based group located in Ontario, Oregon, are moving forward with plans to open Malheur County’s first-ever overnight homeless shelter after attorneys from Stoel Rives in Portland helped defeat a preliminary injunction motion filed by an Ontario business that sought to halt the project.

Stoel Rives Partner Amy Edwards, Associate Jacob Goldberg and Allison Reynolds, Of Counsel, agreed to serve pro bono to defend the shelter project with less than a week to go before the injunction motion was scheduled to be heard in the Malheur County Circuit Court.  A local accounting firm had filed the lawsuit on January 16th seeking to halt the project. The suit, The Nichols Accounting Group et al. v. City of Ontario et al., Malheur County Circuit Court Case No. 20CV03130, claimed that the proposed shelter violated city zoning and building ordinances and would create sanitation and health issues.

The shelter project planned to house homeless residents in up to 20 separate 8x10-foot “tiny houses” to be placed on land adjacent to the accounting firm. To keep the project affordable, the tiny houses by design lack plumbing and kitchen facilities. They are intended only to provide sleeping spaces that securely shield homeless residents from cold winter weather. Meals, showers, and toilet facilities will be provided at a nearby site operated by Origins in Faith, named as a co-defendant in the suit, and at porta-potties located near the tiny houses.

The project is scheduled to operate only through April 30, when the weather is expected to be warmer. The project then will be evaluated to determine whether it should remain open.

Planning for the project had begun in collaboration with City of Ontario officials last fall. The project is intended to address Ontario’s growing homeless population. As many as 400 local Ontario residents are believed to be living in cars, sleeping outdoors or otherwise living in substandard conditions.

According to a declaration filed in the case by Barb Higinbotham, Executive Director of Community in Action, one of the co-defendants named in the suit, local residents expected to be given shelter at the site include:

• A mother and three children, one of whom is disabled, fleeing domestic violence.

• An individual sleeping on the street and with severe health issues. The individual is supposed to be on oxygen at all times but rarely has access to the electricity needed to run the machine.

• A mother who has stage 4 cancer and her spouse who recently had surgery.

• An elderly couple, ages 79 and 82, recently displaced due to the home they were renting being sold. Due to age and disabilities, the family is scared to live in their car.

After a one-hour hearing on February 4th, Malheur County Circuit Judge Lung Hung denied the plaintiff’s request for an injunction. The shelter will now be able to open as planned.

Without the pro bono help offered by Stoel Rives, the shelter project easily could have been derailed by the cost of legal representation. Thank you to Stoel Rives and especially thank you to Amy Edwards, Jacob Goldberg and Allison Reynolds for proving the Power of Pro Bono!

Looking for Legal Help? This website is for lawyers and legal services staff only. Members of the public looking for legal information or legal help should visit OregonLawHelp.org.